Uncle Sam is a Democrat 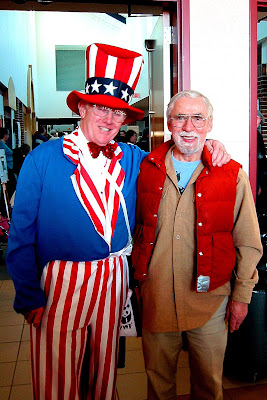 Uncle Sam and friend.
Posted by Steve Glines at 4:02 PM No comments:

The Republicans have recently come up with a set of 10 positions that the faithful must take to be considered "pure". I wrote a rebuttal of these in an email to Paul Avella a Littleton Republican and a past and future candidate for State Rep. and a member of the Littleton Rotary Club.

Paul Avella wrote:
And which of the ten do you disagree with?

PJ - Here are MY thoughts:

Calling it Obama's bill is a pushing it a bit. Everyone wanted it. If McCain had been elected he would have done exactly the same. Democrat and Republican economists gave exactly the same advice - pure Keynesian economics. Heck even Nixon once said, "We're all Keynesian now."

Obama was very conservative. Real Keynesian theory would have dictated almost $3 trillion in spending (the GDP deficit) but since the Fed created $3 trillion in new money to prop up friends of the Republican party (wall St.) Obama and friends restrained themselves. Besides it would have been hard to spend that much short of creating another war. Bush/Cheaney would have created another war (Pakistan? Korea?) which is one of the reasons why I think Obama got the Nobel Peace Prize.

Why not support the 1960's style Blue Cross/ Blue shield system (which worked very well) where each state had only one non-profit monopoly. More to the point I believe that it's the function of government to provide (or at least regulate) those things we can't provide for ourselves. I think government should run (or heavily regulate) our education system, our "Public Works" - water & sewage, our communications systems, our roads, railroads and even the airline industry, our defense (including police) and, yes, our health care system.

Absolutely so long as the ballot really is secret and organizers are allowed access to the employees and companies aren't allowed to manufacture artificial, temporary workers.

(5) We support legal immigration and assimilation into American society by opposing amnesty for illegal immigrants;

Well, they are here and they aren't going home. Since most of them are working, paying taxes and contributing to society (and we obviously need them as workers) why not acknowledge that fact and give those working to earn the American Dream a way into American Citizenship., After all most of us are immigrants and I'll bet not all of us started out as completely legal immigrants.

(6) We support victory in Iraq and Afghanistan by supporting military-recommended troop surges;

I may differ from most of my colleges in at least partially agreeing with you. The fact is we're there and we made a mess of Iraq so are honor bound to clean it up. As to Afghanistan I'm inclined to simply nuke it enough to get Bin Laden then declare victory and leave. If the Afghans can't get it together then to heck with them. Al qaeda is the enemy not a bunch of foolish religious nuts that are happy living in 1400. But then I'm not the president … thank god you're thinking.

Containment certainly but containment without engagement is a long term loosing proposition. Neither of the nut cases will be around forever and we must be in the position to take advantage of a change in leadership to bring those countries back into the international fold. Obama knows this but I get the impression that most Republicans don't. Bush and Chaney certainly didn't think that far ahead.

(8) We support retention of the Defense of Marriage Act;

When I was running for school committee in Belmont a lady asked me what I thought of abortions. My answer was that it was none of my business. As far as I was concerned the abortion issue was a very private matter between a woman, her doctor and her conscience/religion and that since it was none of my business, by extension, it was none of the states business either. I would say the choice of domestic partner falls into the same category.

(9) We support protecting the lives of vulnerable persons by opposing health care rationing and denial of health care and government funding of abortion;

(10) We support the right to keep and bear arms by opposing government restrictions on gun ownership.

I've always read both clauses as forming a single sentence. If there were two thoughts the use of a coma would have been replaced by a period. As a single thought the first phrase frames the rest:

A well regulated militia being necessary to the security of a free State, the right of the People to keep and bear arms shall not be infringed.

In other words each town is allowed to have and manage its own police force (militia) and there is nothing the state or the federal government can say about it. To me that also says that the police (the well regulated militia) as controlled by the local government has the right to regulate all private arms within its jurisdiction. Of course, all citizens are part of the militia by default whether they are armed or not. I suspect most police would not necessarily like my interpretation any more than they like the Republican interpretation which permits a greater chance of being shot at.