Our next meeting is Tuesday, 12/5 @ 7:30pm  in Room 230 of Town Offices building. We will be having a guest, Donna Patalano, 2018 candidate for Middlesex District Attorney. Marion Ryan is current DA.

We are attempting to get candidates for Congress to show up too.

Posted by Steve Glines at 11:54 AM No comments:

The Democratic Town Committee of Littleton will hold its quarterly meeting on June 21 at the Littleton Town offices. All are welcone.
Posted by Steve Glines at 2:56 PM No comments:

On Saturday, June 3rd, a Littleton delegation of six traveled to the Democratic State Convention in Worcester MA, joining more than 3000 party activists to vote on the draft of the 2017 Massachusetts Democratic Party platform. The platform is a statement of the party values and vision, and serves as a guide and focus for the party’s priorities for the next four years. Littleton delegates to the convention were elected at a caucus last February and included Anna Hueston, Irene Jackson, Linda Taricano , and Gretchen Webster. Also included in the delegation were two ex-officio delegates, Jane Chrisfield, Chair of the Littleton Town Democratic Committee, and Alex Pratt, State Committee member.

This year’s draft platform was considered to be the most progressive in recent history, having been shaped by testimony at numerous official and unofficial platform hearings across the state prior to the convention, including a combined Littleton/Boxborough hearing in Littleton. The passage of four amendments to the platform introduced by the progressive arm of the party pushed the platform even further left. Among the issues addressed by the amendments: a call to end for-profit prisons, prohibition on candidates accepting political contributions from fossil-fuel companies, student loan forgiveness, rank choice voting, and an Election Day holiday.

Delegates were obviously energized by the need to take a bold, principled stand against the regressive, backward policies of the Trump administration. Party officials noted that among the delegates attending almost 30% were first-timers who had never before attended a Democratic convention.

Delegates also voted on the party charter, which functions as the party’s “Constitution”. Two proposed amendments to the charter, which dealt with lowering the threshold for amending the charter and increasing the number of State Committee seats, were defeated.

Voting on eleven proposed resolutions was the last item of business for the delegates. Due to the late hour of the day all the resolutions were tabled and sent to a sub-committee for consideration.

The Littleton Town Democratic Committee (LTDC) meets quarterly in Room 230 of the Town Offices Building. It focuses activities on the election of Democratic candidates for state and federal offices and is an advocate for programs that further the values and vision of the party platform. For further information contact Jane Chrisfield, LTDC chair, at jchrisfield1@verizon.net.
Posted by Steve Glines at 2:53 PM No comments: 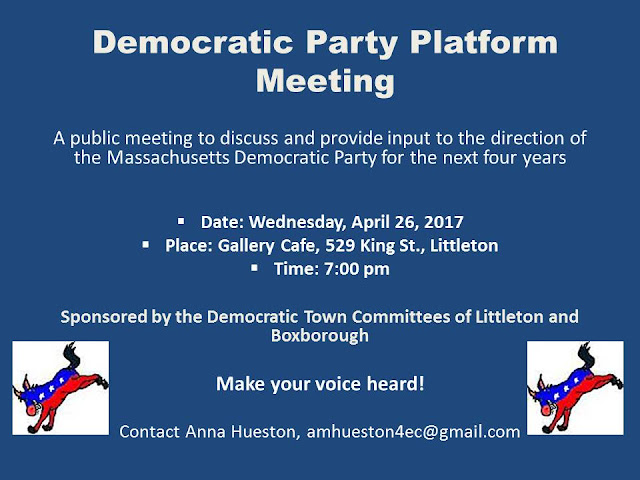 Posted by Steve Glines at 3:31 PM No comments:

Registered Democrats in Littleton will hold their annual caucus in Room 103 of the Town Offices Building, 37 Shattuck Street, on Saturday, February 11th at 1:00 pm to elect 5 delegates and 4 alternates to the 2017 Massachusetts Democratic Convention, where Democrats from across Massachusetts will gather to adopt a new Party Platform. The Convention will be held on Saturday, June 3rd at the Tsongas Arena in Lowell.

“Our caucus is a great opportunity to come together and be involved in our shared Democratic values,” commented Jane Chrisfield, chair of the Littleton Town Democratic Committee. “This year, more than ever, we need people to participate to make a difference as we vote on our Party Platform at the Convention.”

The caucus is open to all registered and pre-registered Democrats in Littleton and the Democratic Committee welcomes participation. Pre-registered Democrats who will be age 18 by September 11, 2018, the anticipated date of the primary, will be able to participate in the caucus and run for delegate. Delegates will be divided equally between men and women, and all ballots will be written and secret.
In the spirit of inclusion, youth, minorities, and people with disabilities, who are not elected as delegates or alternates, may apply to be add-on delegates, either at the caucus or online at www.massdems.org.

For more information on the Littleton caucus or the Littleton Town Democratic Committee, please contact Jane Chrisfield at jchrisfield1@verizon.net / 978-486-4419
Posted by Steve Glines at 4:21 PM No comments: